So, as you guys know, I showed you my favorite dinner roll recipe for Thanksgiving. While some of you might have made them, some might have just bought them at the store, frozen or not, and used them for Thanksgiving. Well, I had a whole gallon bag of them left over, and they come out big, so they were some rolls to be reckoned with! But, all my hard work of prepping those rolls with lots of tender loving care, I didn’t want them to go to waste, so I decided to make a french toast bake out of them.

Before we get started, let me tell you from personal experience before I decided to do this blog… not all French Toast Bake is created equal. I’m not certain what you guys look for in french toast, but I like mine soft, custardy and french toast like. I do not, I repeat, do not like DRY french toast. What’s the point of that?? Might as well just throw some bread in the toaster, pour syrup on it and call it good. So if you like your french toast dry and flavorless, this recipe isn’t for you!

The recipe I provided is for a 9 x 13 baking dish. If you want just an 8 x 8 serving, simply half the recipe. I used dinner rolls, but you can use any bread that is dense and thick crusted such as french bread or brioche. The reason for this is, if you use regular ole bread, it’s going to get squishy and fall apart. 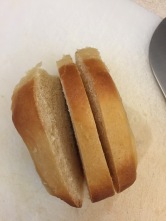 Begin by preheating your oven to 350. I then got out my cake pan and just put the 4 tbsp of butter (not melted) in the cake pan. I find that melting butter in my microwave, even 5 seconds at a time, ends up in butter explosion so I put it in the pan and then put the pan in the oven to let it melt. Same way I do it when I’m going to cook cornbread because.. mmm hot butter before you pour in the corn bread makes for a nice, buttery crunchy bottom on your cornbread. But, if you do melt your butter in  your baking dish, don’t put it into the oven until your bread has started soaking. 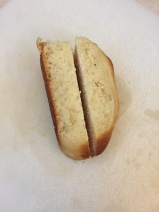 I took my dinner rolls and cut them a certain way just because of how they were shaped, but the end result is cubes. So I cut it three times long wise right down the middle, then I flipped it on its side and cut it once down the center. Then I simply cut it up into cubes since we have effectively cut the roll into ‘breadsticks’. If you’re using smaller dinner rolls, don’t worry about cutting three times here and one time there. Just cut them until you have bread cubes the size of a game dice.

Once the bread is cubed, I put it in a large mixing bowl. In a separate bowl I combined ALL the rest of the ingredients. First I add the milk and cream, and then the eggs, and whisked it all together until it was well combined. I used 9 eggs because I couldn’t see leaving that one lonely egg in the carton by itself and things worked out just fine. I figured three eggs per cup of moisture (cream and milk base), is about right anyway for a good custard. I then added in my white sugar and brown sugar and vanilla extract and mixed it in as well. Finally, in went the cinnamon and nutmeg and, guess what, another whisk until the spices aren’t just floating on top. We don’t want some bread pieces with spices and others bland. 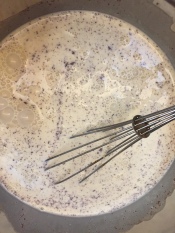 Pour the custard over the bread cubes and fold it in until all those little cubes are completely coated. There’s going to be free standing custard of course. Now, this is where most people get that DRY french toast… they don’t let it soak up any custard, so you get bread bites, or slices, depending on how you do your bread, with bits of cooked custard between the pieces and ew… that’s not appealing! I let mine sit for about ten minutes. Not all the custard is going to be sopped up by the bread and that’s what we want, bread that is nice and soft with custard with some liquid left over to fill in the gaps when we cook it.

If you didn’t melt your butter in  your dish like I did, simply pour your melted butter in the bottom of your baking dish and now you’re going to pour your custard in. Go slow so you don’t slap hot butter over the side and burn yourself. Also, we don’t want to waste the butter either by having that splashing action because.. it’s butter…delish! If you DID melt your butter in your baking dish, make sure you take your dish out of the oven when the butter is melted and slightly browned. Don’t let it sit in the oven while your custard is soaking into the bread. 10 minutes MIGHT be too long depending on the type of oven you have and then you are left with butter crunchies and no melted butter.

Butter Ready to be Melted in the Oven

Smooth your bread cubes/custard mix gently into the baking dish until evenly spread. Now place it in the oven, uncovered, and bake it for about 45 minutes. Your french toast bake should be set up, not watery, and the melted butter will be bubbling around the edges of the dish

me people like to, as I put it, over complicate their french toast bake by putting some type of sugary crumble on top of it, but I prefer to let my maple syrup do the talking rather than having a sugar overload and making this a ‘dessert for breakfast’ type of thing. This french toast bake was not overly sweat at all and, after I sliced it and put it on the plate, was nice and slightly bouncy from the custard and crunchy on top which was amazing. I simply drizzled my maple syrup over the top and served it up with some maple sausage.